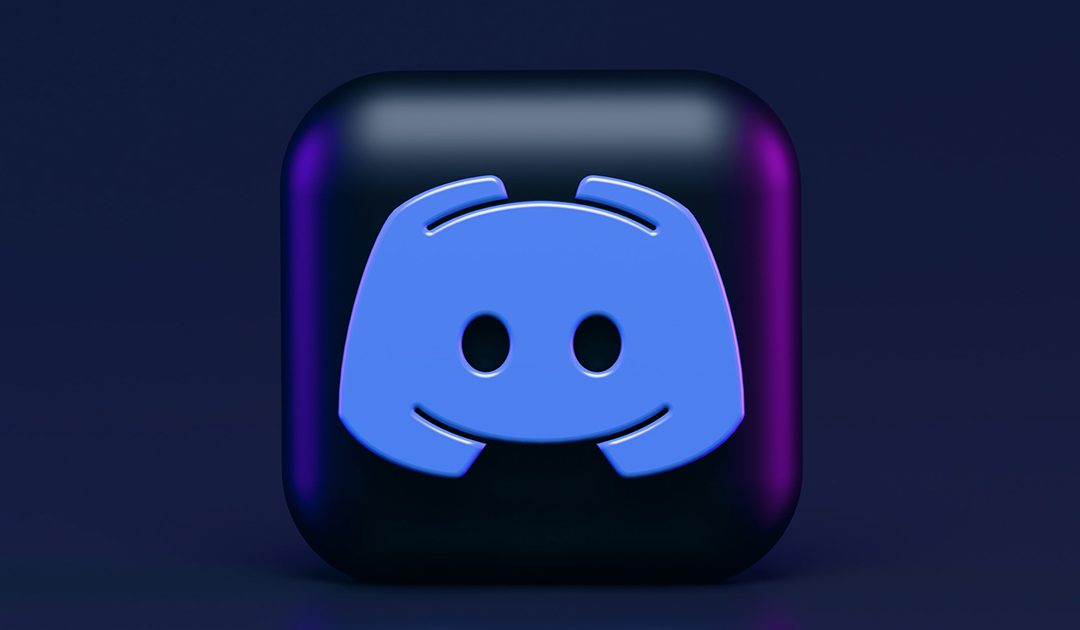 If you are a parent of a young connected citizen, you may have heard of Discord and are wondering what it is all about. Discord is an application/website in the long line of Social Networking platforms that has created a vast connected community of online users that blends video, voice and text chat features. Discord’s main function is to provide a platform for gamers to communicate. It has now evolved into a general use platform for all sorts of communities, not just gamers, to connect and collaborate. Recent reports suggest the platformed has reached 250 million active users globally.

We recently spent some time using Discord. Here is what we discovered and felt most important for you to know about:

WHAT IS DISCORD? A QUICK OVERVIEW

​Discord is a free-to-use voice and text communication platform that can be integrated with many other online platforms such as YouTube, Spotify and Twitch. With a large percentage of it’s users identifying as ‘gamers’, Discord Users create what is known as a Discord Server that can only be accessed through a specific invitation link. Within these Servers, people are free to communicate through text or voice Channels catergorised by topics. A helpful analogy to better understand online server/channel formats is to think of a Discord Server as a house and the Channels within that Server as the rooms  in the house.

Let us paint the picture… as a Discord user, I can create a server (house) based on my favourite video game (or any topic). Within this server, I then can create different channels (rooms) where other users can connect and communicate in. These might be a general text channel, a place to talk specifically about the game, general conversations or sharing of content including links and images. Within these spaces, I can also add voice enabled channels to make it easier to communicate and share ideas.

All of the channels added and created within a server can be locked to certain members of the server. Whilst there are moderators that have the power approve or decline user requests and monitor content that is posted, be aware that these moderators are not always on top of what is being shared. We’ll touch on this a little later.
​
Discord is very easy to use, freely available and accessible everywhere (across web browsers on PCs or the Discord App on tables/mobile phones). It offers it’s users the opportunity to connect with others on a global scale and is rapidly expanding it’s user base beyond the gaming realm. WHAT WILL YOU SEE OR FIND ON DISCORD?

Discord has become an extension (additional platform) for many gamers to connected through ‘feed/thread’ style communication. When playing online games such as Fortnite, FIFA, Rocket League, Call of Duty, Fall Guys (just to name a few) users can only interact within the games functionality, which can be limited to just live text or voice chat.

Whilst Discord is social, unlike the traditional social networking platforms (such as Instagram, Facebook or TikTok), Users do not post content to a profile or scroll through a feed of random posts of you they follow. The drawcard for Discord users is that most of the interaction and conversations are hosted in private servers or channels and discussions revolve around gaming themes. If there is an online game out there, there is likely to be a Discord server that you can request to join.

Discord is a user generated platform, meaning that the User (not Discord) are responsible for creating servers that are made for the general public to join. Some are open and some a private. This means users can create a private server for their friends to chat and communicate with games, however, unfortunately, this also means users can just as easily create a NSFW style server whereby anyone within this group can share content and start discussion topics. It is common to find pornography, inappropriate content including sex, drugs, alcohol, racism and explicit language throughout Discord.

​While gaming is the biggest draw card for many people to on Discord, we are beginning to see a variety of other topics/content appearing on Discord. It’s also important to note that many servers are tagged as NSFW (Not Suitable For Work). These servers are noted as 18+ however provide little to no warning that a particular server is  “NSFW” before joining.

The true attraction of Discord is that anyone can create a Discord server and invite others to join and participate. Once accepted into a Disco server, users can then post whatever content they wish to share. The creator or owner(s) of the server can moderate the content (delete items they feel are inappropriate) however not all of them do. Even in moderated servers, inappropriate content could be visible so for some time before a moderator gets around to reviewing or deleting it. WHAT ARE THE AGE RECOMMENDATIONS

Discord’s Terms of Service states that users must be at least 13 years old to access the platform. For Users to have the ability to view adult content they must verify their age. Frustratingly there is no technical way to verify a user’s age online, so like with so many online platforms, a simple checkbox bypasses filters or barriers that may be in place. This really may cover the developer for any legal implications arising if younger people access the platform.

WHAT SETTINGS CAN USERS LEVERAGE TO TAKE CONTROL?

In general terms, our investigation into Discord determined this platform is NOT safe for children and young teens. However, like many online platforms today, there are opportunities to “take control” of privacy, security and wellbeing with Discord.

Currently there are NO parental controls within Discord that prevent a young person from making changes to their Discord profile settings. This makes it easy for them to change settings themselves. If a young person in your care is using Discord we highly recommend monitoring and reviewing their use of the platform regularly. When creating Discord severs users can create and activate ‘safer’ servers to chat and game with friend which makes use of user verification technologies and automatically turns on Explicit Content Filtering.

In the image below, you can see the option to select “Keep Me Safe” mode. You can find this located within Privacy and Safety settings. This setting attests to scan (using inbuilt Artificial Intelligence to scan ) for Explicit and NSFW (Not Suitable For Work) content such as pornography, explicit language and other inappropriate material, blocking it from appearing throughout the platform. Whilst AI does work in some instances, this is never a guarantee. 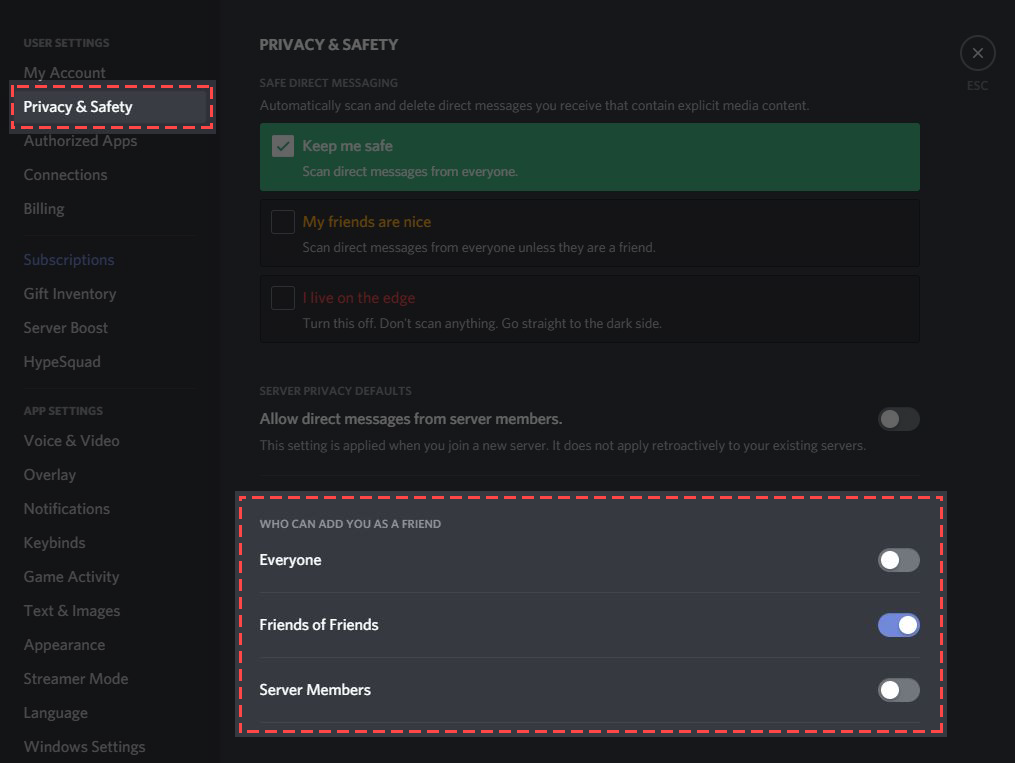 CAN I  MAKE DISCORD SAFER FOR MY CHILDREN?

The short answer is no.

The settings do provide users the ability to report and block harmful content or users within the platform, but by this stage the damage is already done. To report on Discord you can find a step by step process available on their website here.

At the Cyber Safety Project, we believe that knowledge is power and therefore it is always important for those supervising young people who access connected technology it is crucial understand how the apps and different online platforms work. We also support the recommended age guidelines on applications and firmly believe they should be adhered to. For Discord this is 13+ years of age, and while it can be a fun space for teens to hang out with their friends, if you’re worried about what your children might be seeing, take a closer look and judge whether this is a space online you are comfortable for your child to be apart of.

If you’ve decided to let your teen use Discord, it’s important to regularly have open conversations and talk to them about their experiences. Discuss how they are protecting themselves, what steps they are taking to protect themselves and who they are connect with. Be sure to actively engage with what they are doing and explore together any servers they want to access (or are already accessing) to see first hand what they may see while using Discord.

At the end of the day, this is another platform where people from all over the world can access. Whilst we can control what we do online, we cannot control what others say and do in public online spaces.

HOW CAN I GET HELP IF SOMETHING IS GOING WRONG

If you or your family are are experiencing challenges with Discord, immediately report the content (or user) to Discord through the App Settings (Discord Help Guides). You can also contact the eSafety Commission or Think You Know to report illegal or harmful content circulating on social networking sites.